Главная / Портфолио / 3D modeling of a perfume case for iPhone

3D modeling of a perfume case for iPhone

In order to gain massive consumer demand, any device or accessory must be not only functional, but also aesthetically pleasing. Industrial design (industrial design) solves these two problems, which is why it is so widespread.

Creation of 3d models, printing of 3d models on a printer and 3d prototyping have greatly simplified the process of developing a new device or product. The finished product model and prototype allow you to examine the finished object from all sides, identify and correct existing deficiencies, test how the product is perceived and evaluated by the target audience.

KLONA company developed a 3d model and made a prototype of a mobile phone case for a young industrial company from Kiev. The goal of the project was to create a mass-produced phone case for the presentation of the project to European investors. Since the project has not yet been launched, the name of the company has not been disclosed in order to maintain confidentiality.

Terms of reference for the design of the facility: 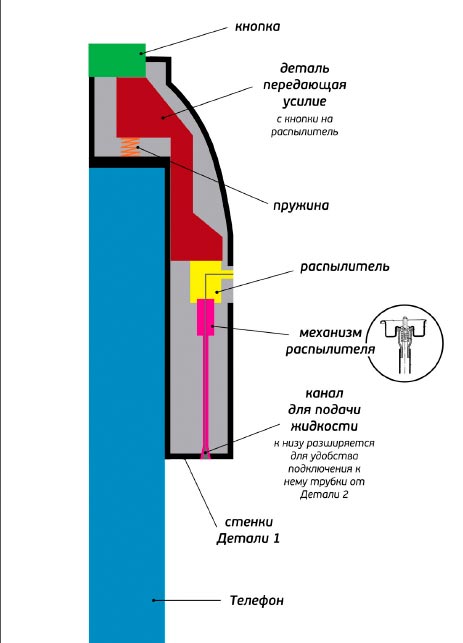 The primary task of the project was to coordinate the customer’s project idea with the technologist. As a result of the agreement, certain adjustments were made to the concept to bring the facility in line with the requirements. After the approval of the sketches and the general concept by the customer, we proceeded to create a three-dimensional model of the future accessory for a mobile phone. The creation of the model made it possible to immediately find and eliminate the shortcomings of the product prototype. The changes made are necessarily agreed with the technologist. Further, clamps were added to the resulting model and the gaps between its elements were checked. Based on the database, a sprayer suitable in terms of parameters was found, in accordance with which adjustments were made to the 3d model. After that, the first prototype of the product was made. Printing 3d models is one of the easiest ways to create a prototype. Having received a finished product sample,  we tested it, corrected the discovered deficiencies. We print a prototype on a 3D printer in the highest possible quality and resolution. The resulting prototype is again sent for testing, according to the results of which no shortcomings have been identified. After agreeing on the color-texture solution with the customer, you can start small-scale production. The final stage of work – small-scale production of a prototype of a mobile phone case in the selected color-texture solution. Benefits of prototyping and 3D printing a prototype

Prototyping – an important and integral part of almost any production process, allowing you to choose the optimal solution and launch the production of a truly high-quality product.

3d model printing and 3d prototyping provide manufacturers with a range of opportunities and benefits.

In addition, 3d prototyping allows you to quickly and cost-effectively produce architectural and presentation models, which allows you to identify the disadvantages and advantages of a construction or a building that cannot be found in sketches or drawings.

Printing 3d models on a printer, creating a prototype are indispensable in the production of souvenirs and exclusive accessories.