View an interactive 3d presentation of the park

The time has come when, without leaving your home, you can realistically imitate the material world and participate in it: be present, play, learn. For businesses of the 21st century, it is important to simplify the life of their target audience as much as possible by presenting their services and products online.

The technology of interactive webGL 3d presentation is already actively used by enterprises focused on the online presentation of architectural objects, landscape design projects and others. This feature is a great way to save time and resources for both the company and customers. 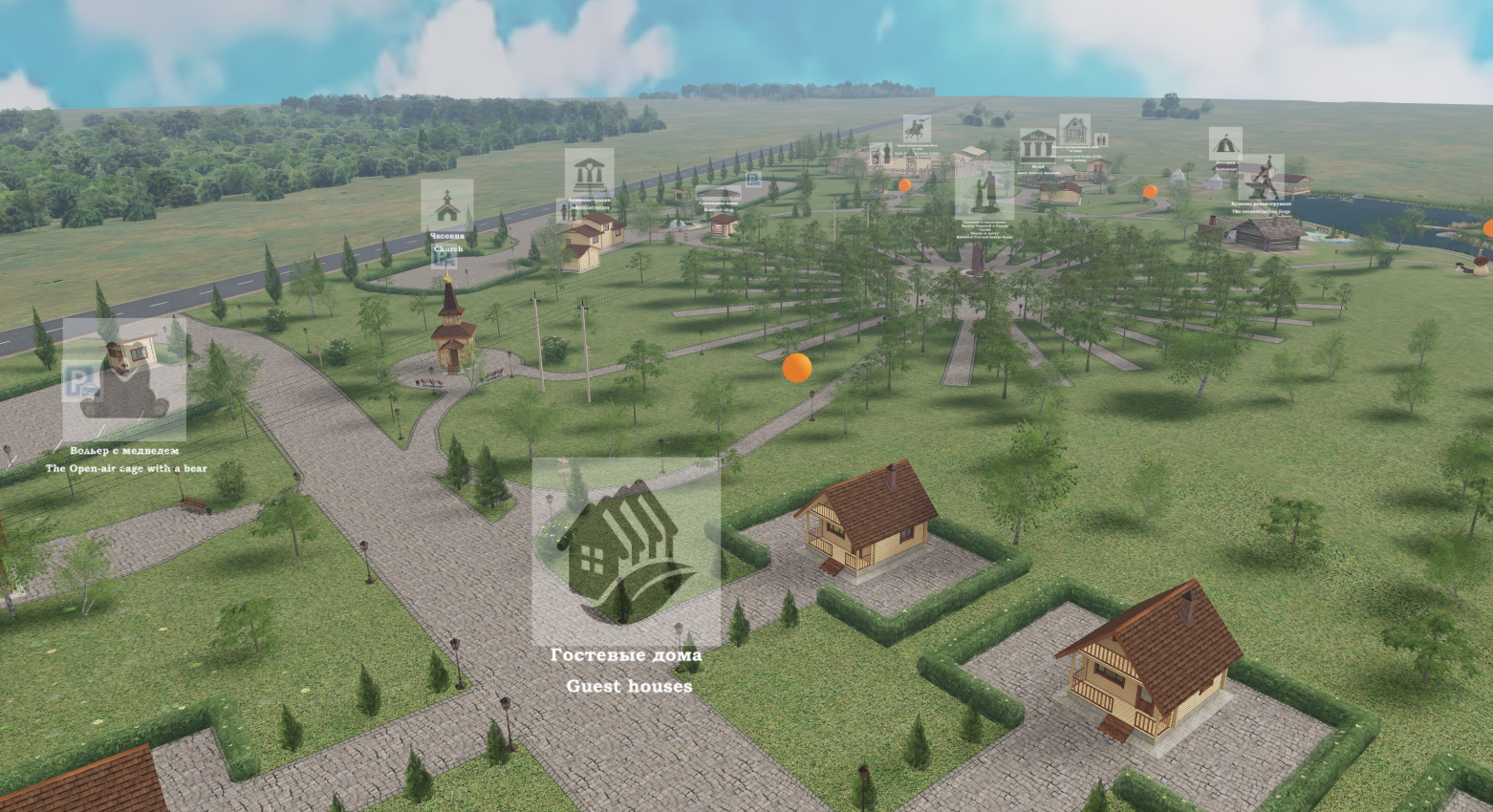 The KLONA company keeps up with the times and actively develops the direction of interactive 3D presentation for the fulfillment of commercial purposes of developers, architects, landscape designers, shop owners and other entrepreneurs from all over the world.

We recently took part in a cultural initiative to perpetuate good and peace in the International Peace Park project in the Zubtsovsky District of the Tver Region. The pacifying idea was to preserve the memory of the heroes of Russia led by Mikhail Tverskoy, its historical heritage and the development of the tourism industry. 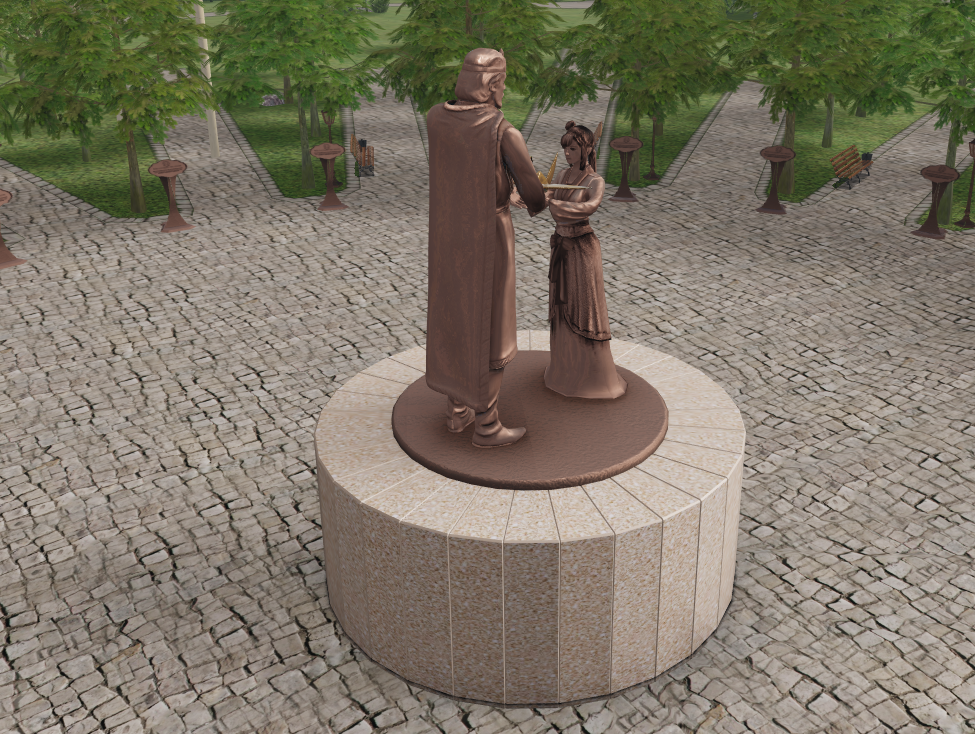 With his project, the founder of the park wanted to raise the spirit of patriotism of Russian citizens and advocate friendship between peoples of different countries of the world. To implement this unique program, our team set about creating a design project for a park area and developed an interactive webGL 3d presentation for the site.

Why did the client turn for an interactive 3D presentation service if he could order a simple 3D modeling of the park from a bird’s eye view? 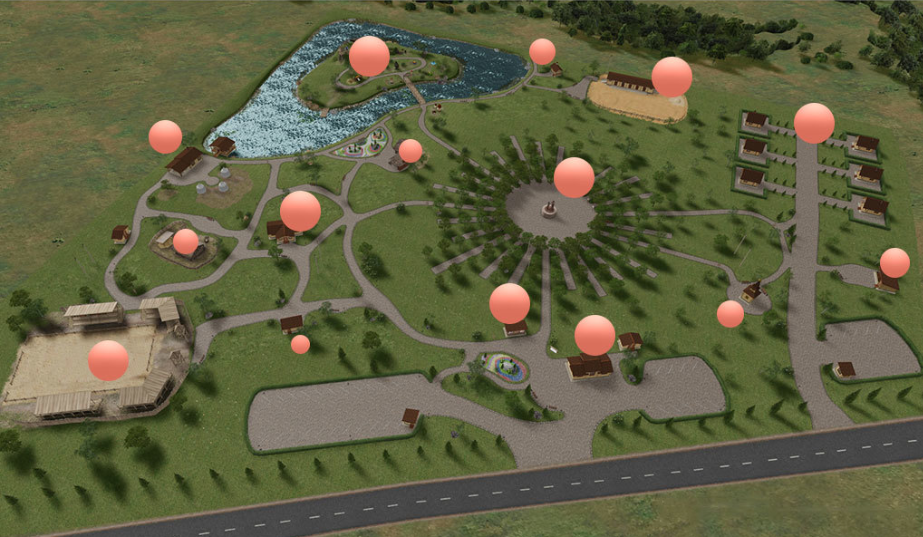 WebGL technology is the ability to display a 3D model in an extremely high quality online mode on a web page. Free scrolling of the 3d model and its scaling replaces the real travel presentation, allowing you to see 3D objects in the environment. This helps to better understand the specifics and quality of objects, and establishes emotional and eye contact. 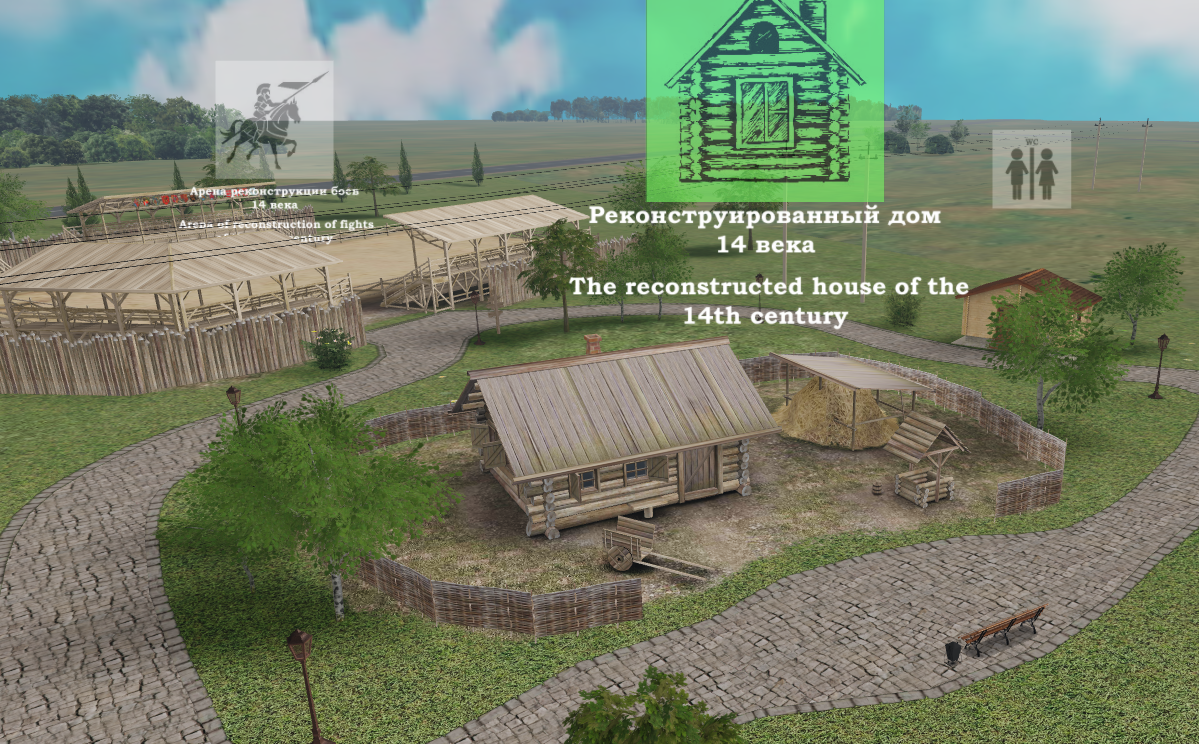 The user interacts with constantly changing images and controls 3d animation. And 3D modeling of textures for all kinds of structures and materials gives the presentation the most realistic look: from wood engraving on a bench to a wiry leaf on a tree.

Virtual 3d tour of the park

Landscape design project of the park

The design project of the park’s landscape outlined the general concept of the future design and style of the site. The sketches of the park territory were drawn, after which textures were applied and with the help of computer 3d graphics a three-dimensional picture was formed. 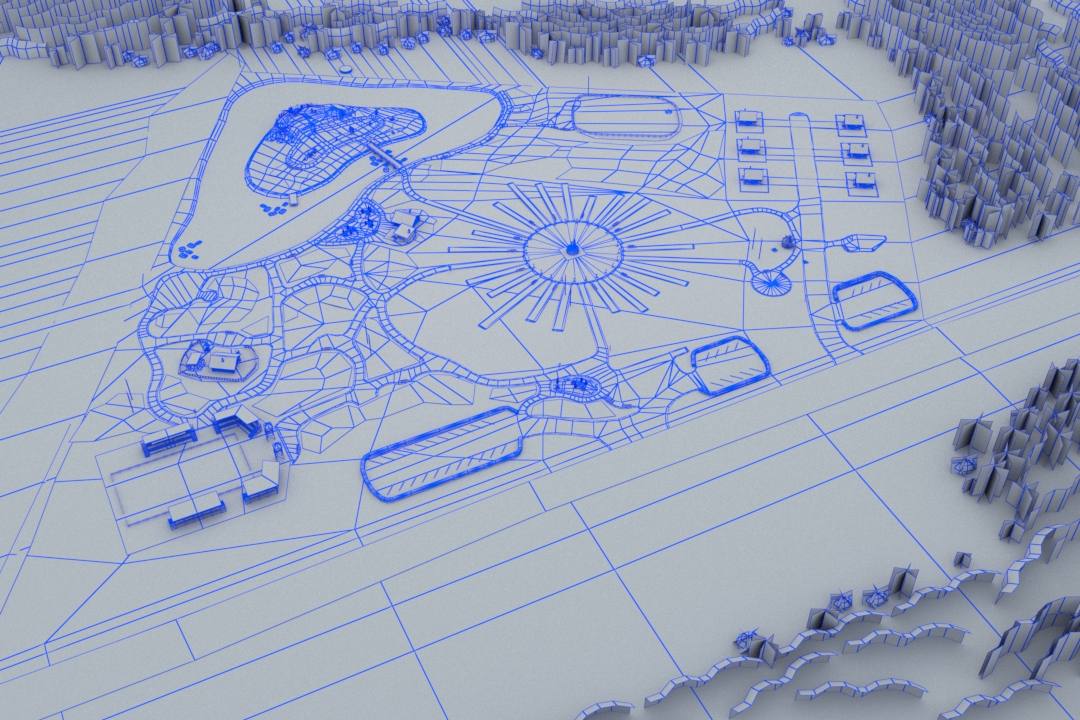 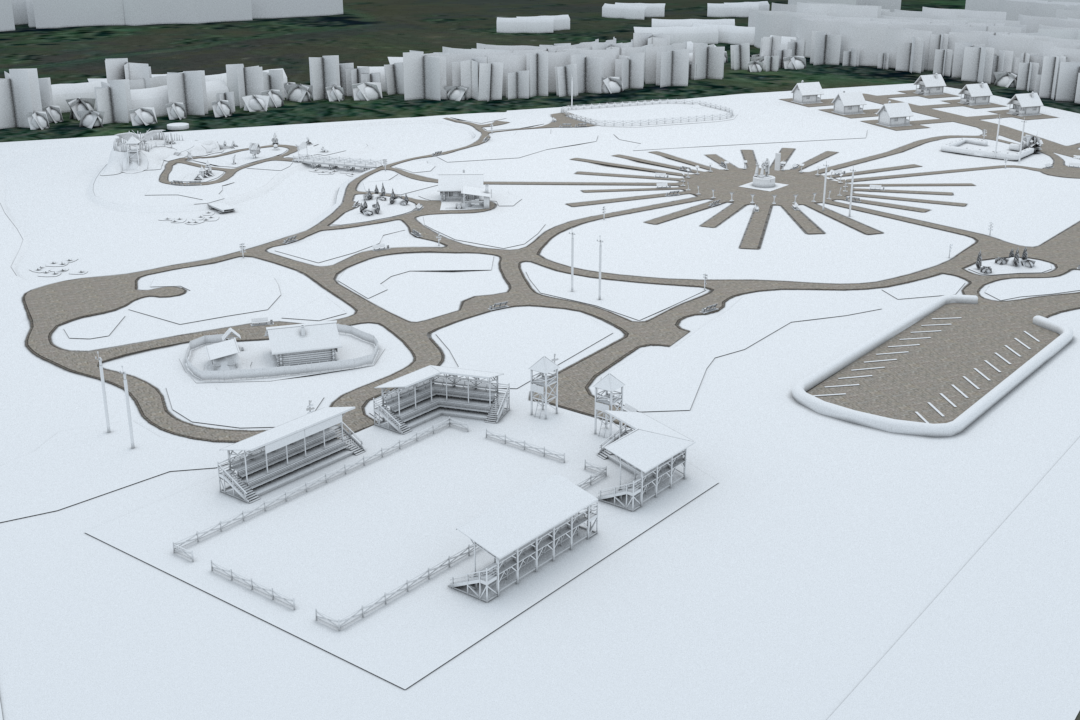 The development of the design of the park area included the concept of the arrangement of landscape elements such as trees, bushes and flowers, the design of paths and alleys with benches, recreation areas and a playground.

The use of three-dimensional graphics in 3ds MAX made it possible to create the geometry of the 3D model of the park, as well as select and apply the texture of the materials from which the real object of modeling will be made to the objects. A natural light source was also installed. 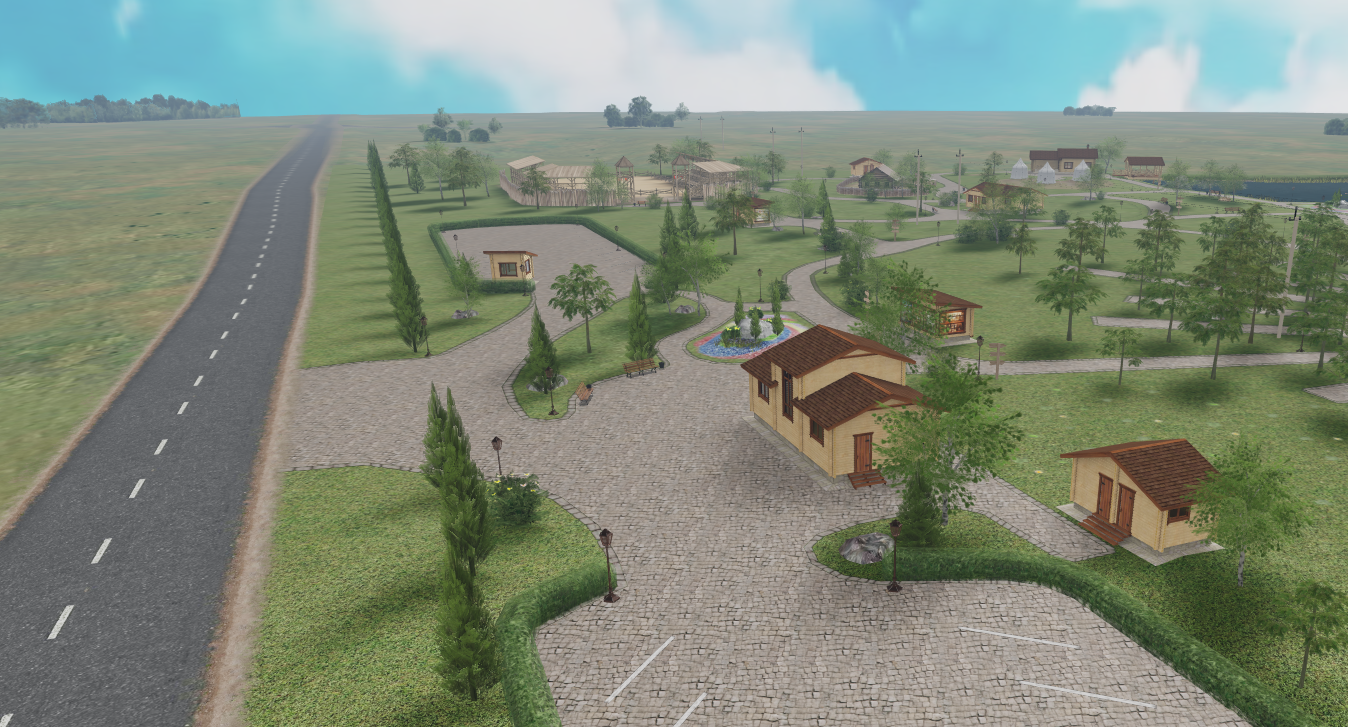 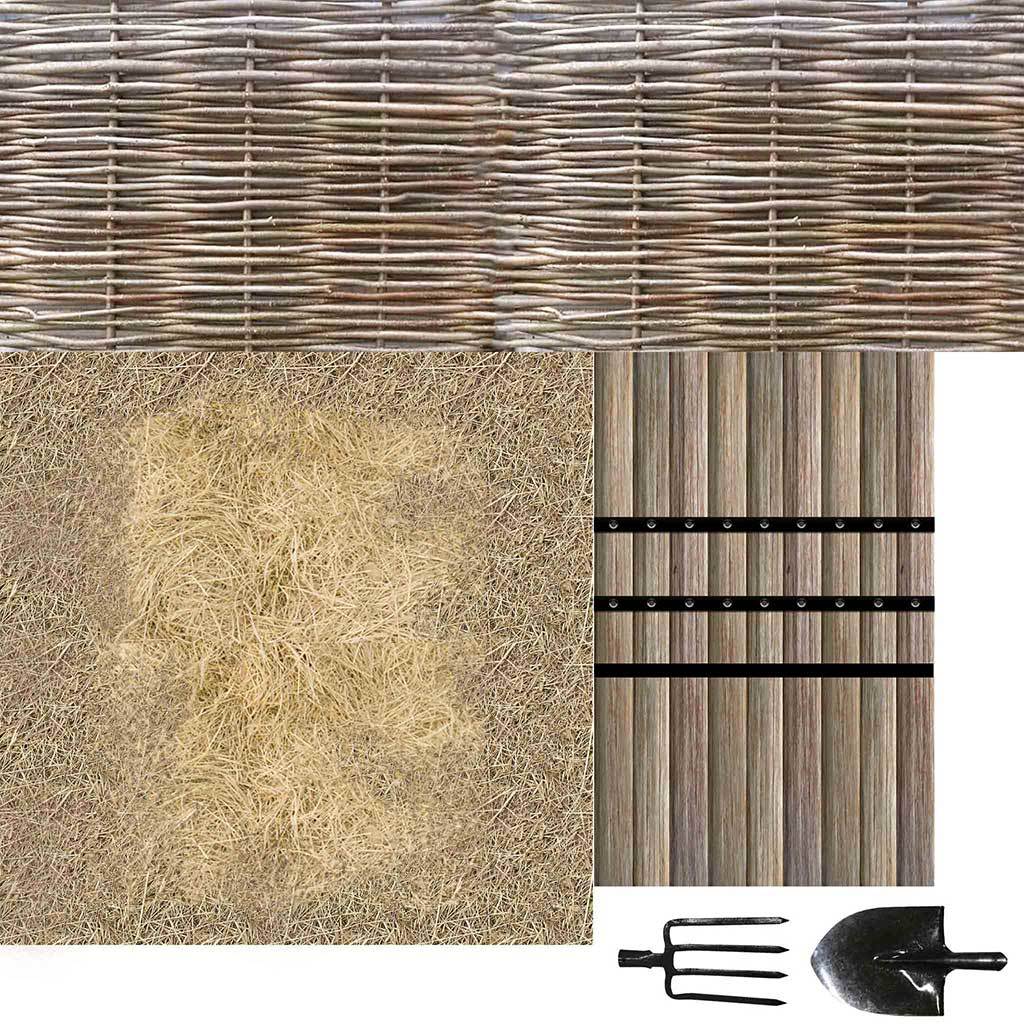 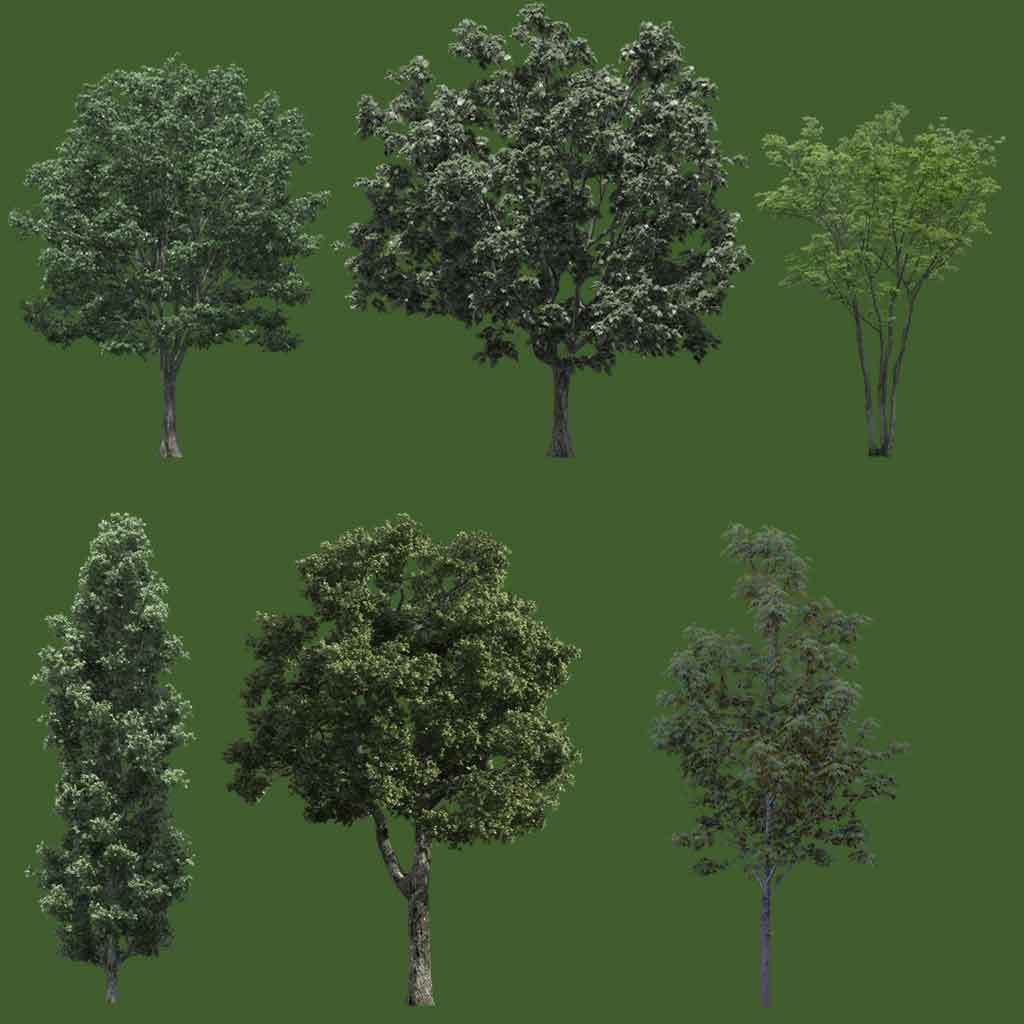 Development of a 3D model of the central monument 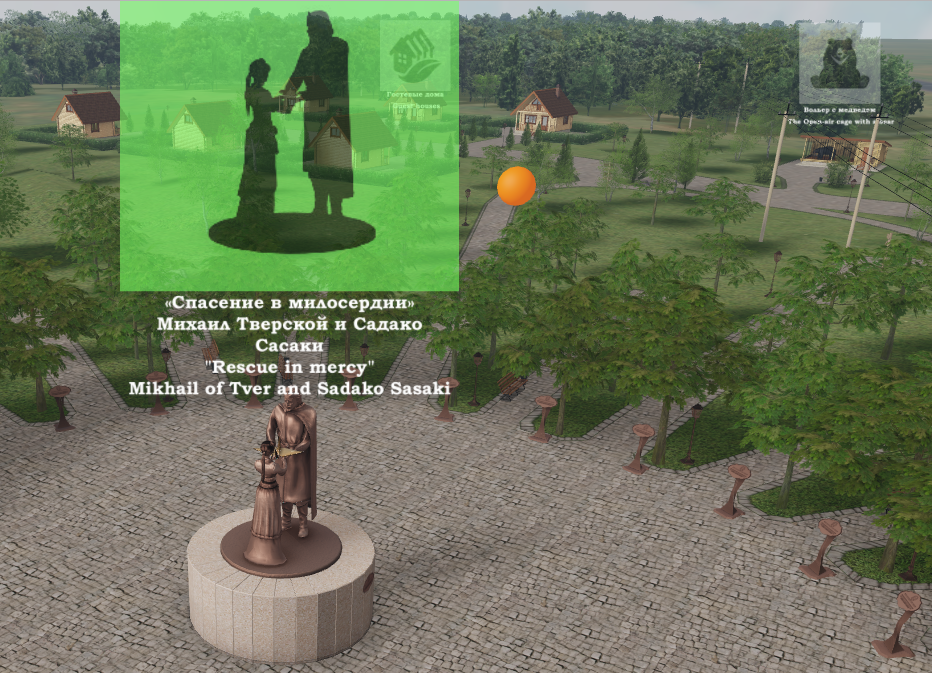 When designing the central monument “Salvation in Mercy” in 3D, we took into account the main idea of the park, where the great Russian prince Mikhail Tverskoy supports the Japanese girl Sadako Sasaki in the situation with the bombing of Hiroshima. The girl believed that if she folded a thousand paper cranes, she could be cured of radiation sickness. The monument has become a key object of the park and a symbol of peace and memory to all peoples of the world. 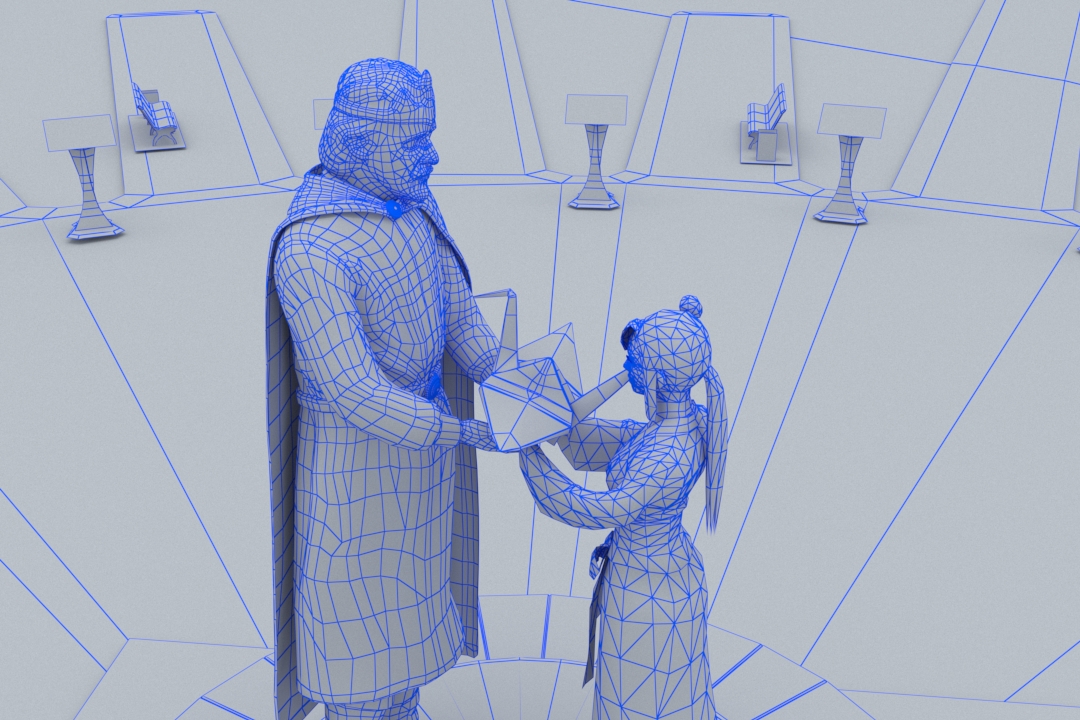 The design project of the park territory was thought out to the smallest detail: paths depart from the monument, which, like rays of hope, direct people to different park zones. Every foreign citizen who shares friendship with the Russian people can use the site from anywhere in the world to plant a personal tree on a section of the park assigned to his country.

Development of navigation in the park

The creation of an interactive 3D presentation of the project allows the user to interact with it in real time and freely move around the park, looking at objects from all sides. The developed navigation through the park contains routes of passage, being a visual guide for the user to use. 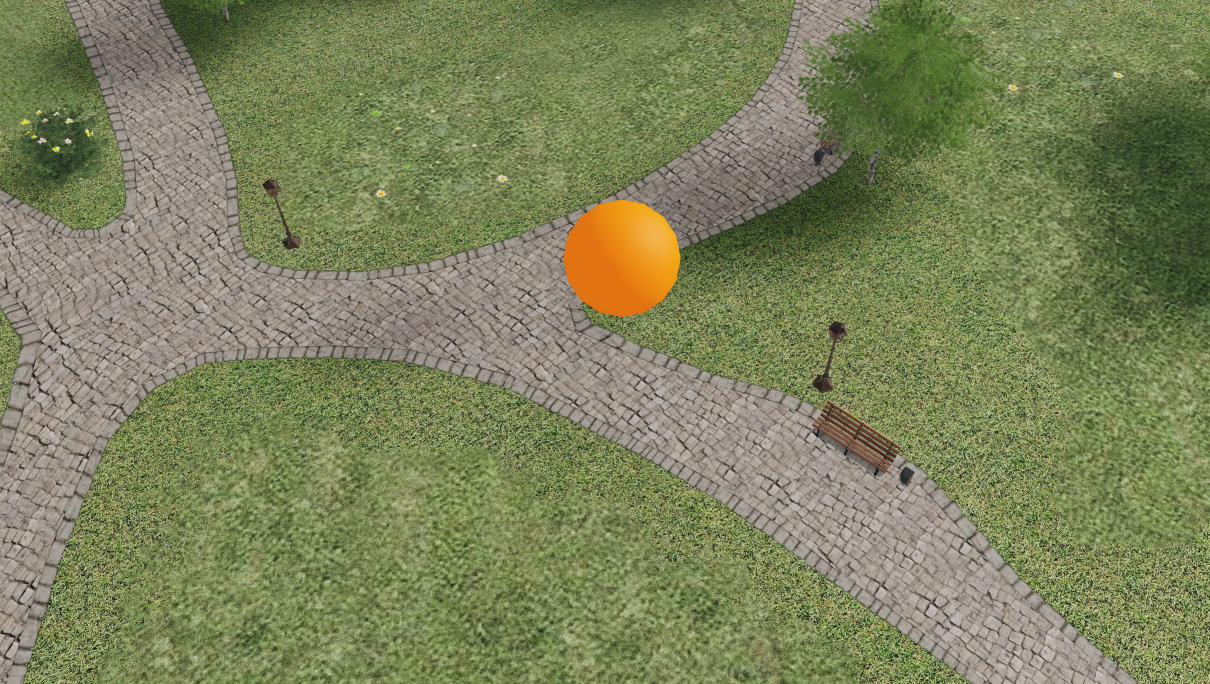 We have navigated by clicking on the bright circular icons, reminiscent of big bouncy balls. In the left corner of the presentation there is a button that hides and shows the site navigation elements. 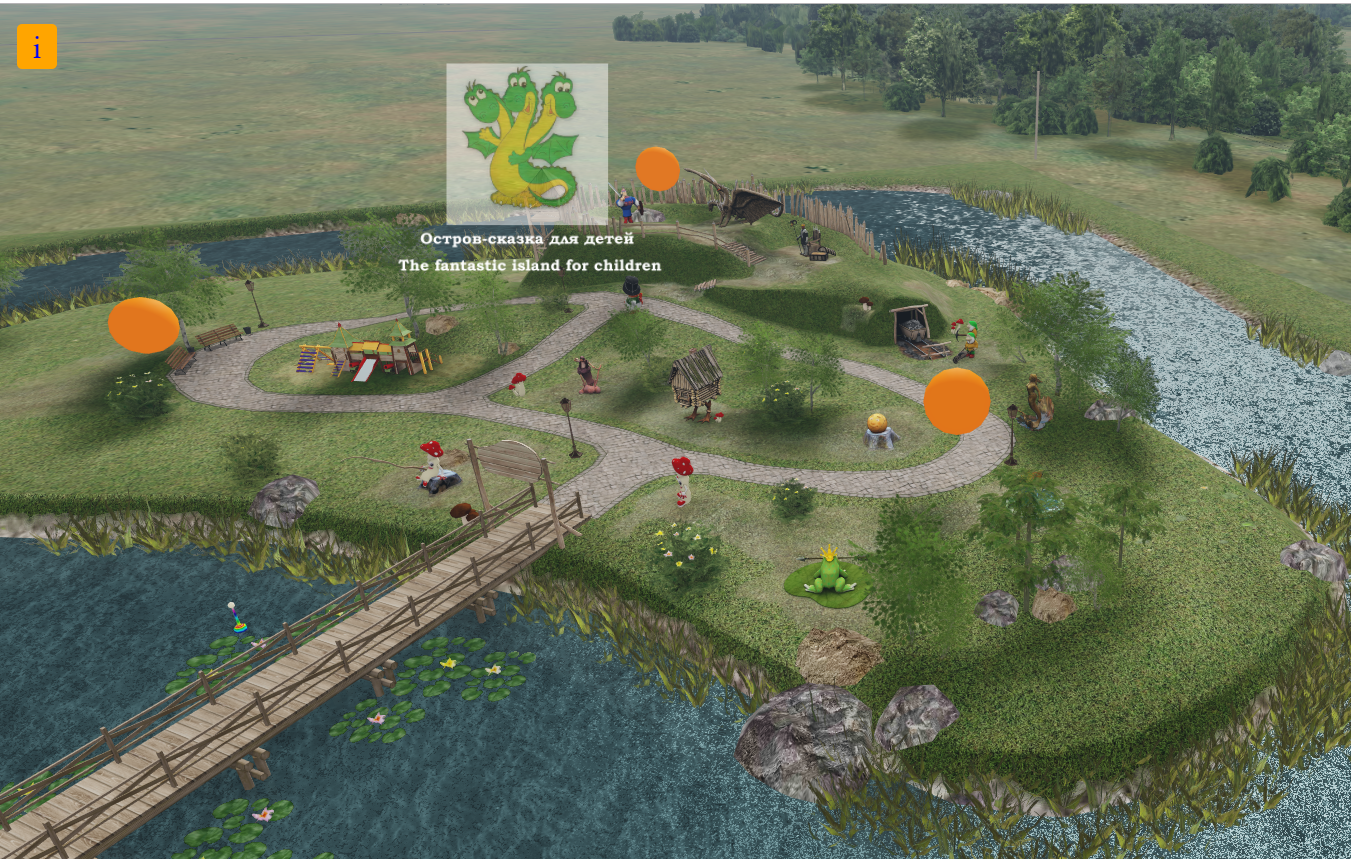 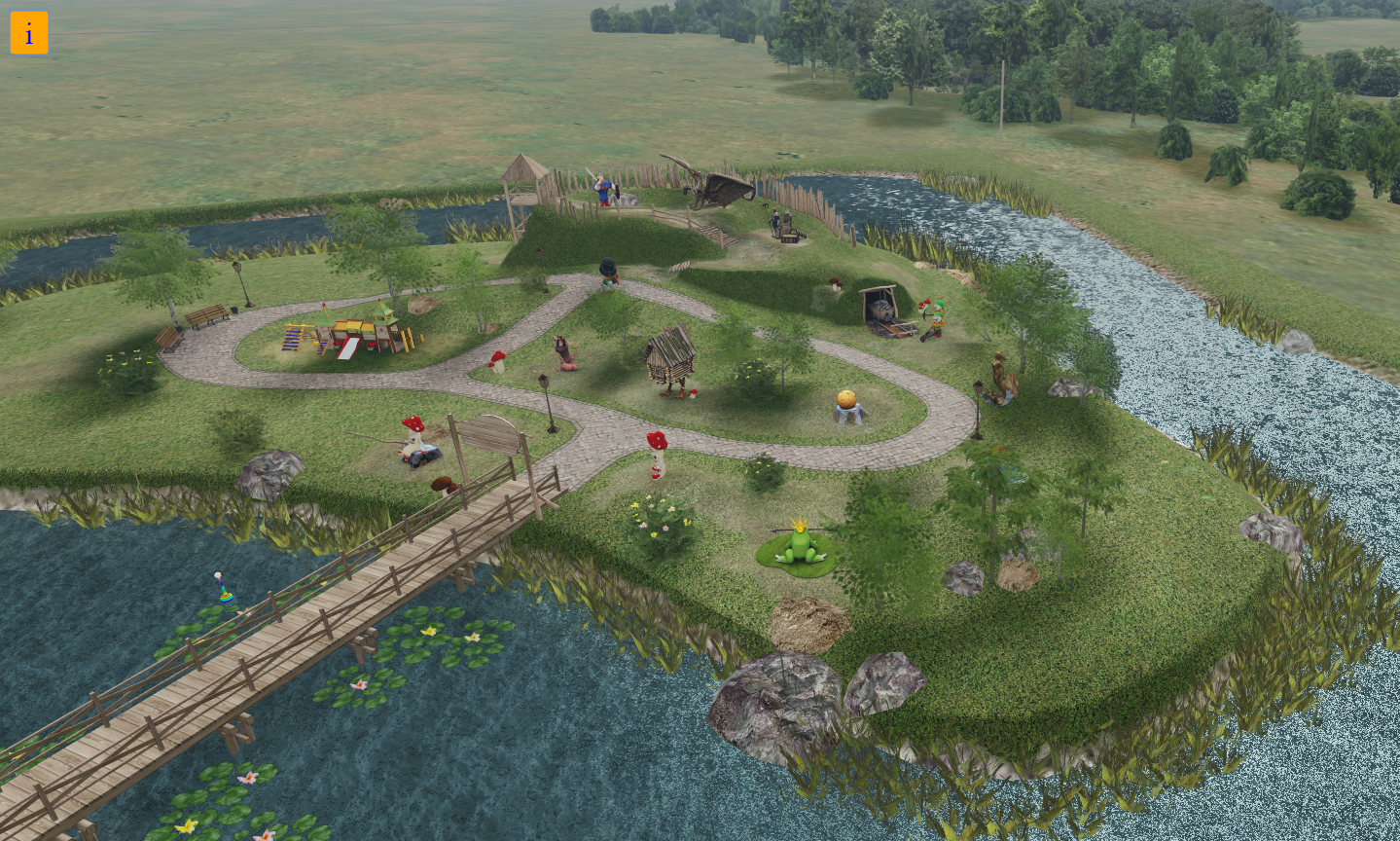 Adding animation to the 3D model not only informs more, but also allows you to demonstrate all the details of the project before it is implemented. You can look into every corner and present the strengths of the project or avoid mistakes even at the design stage. 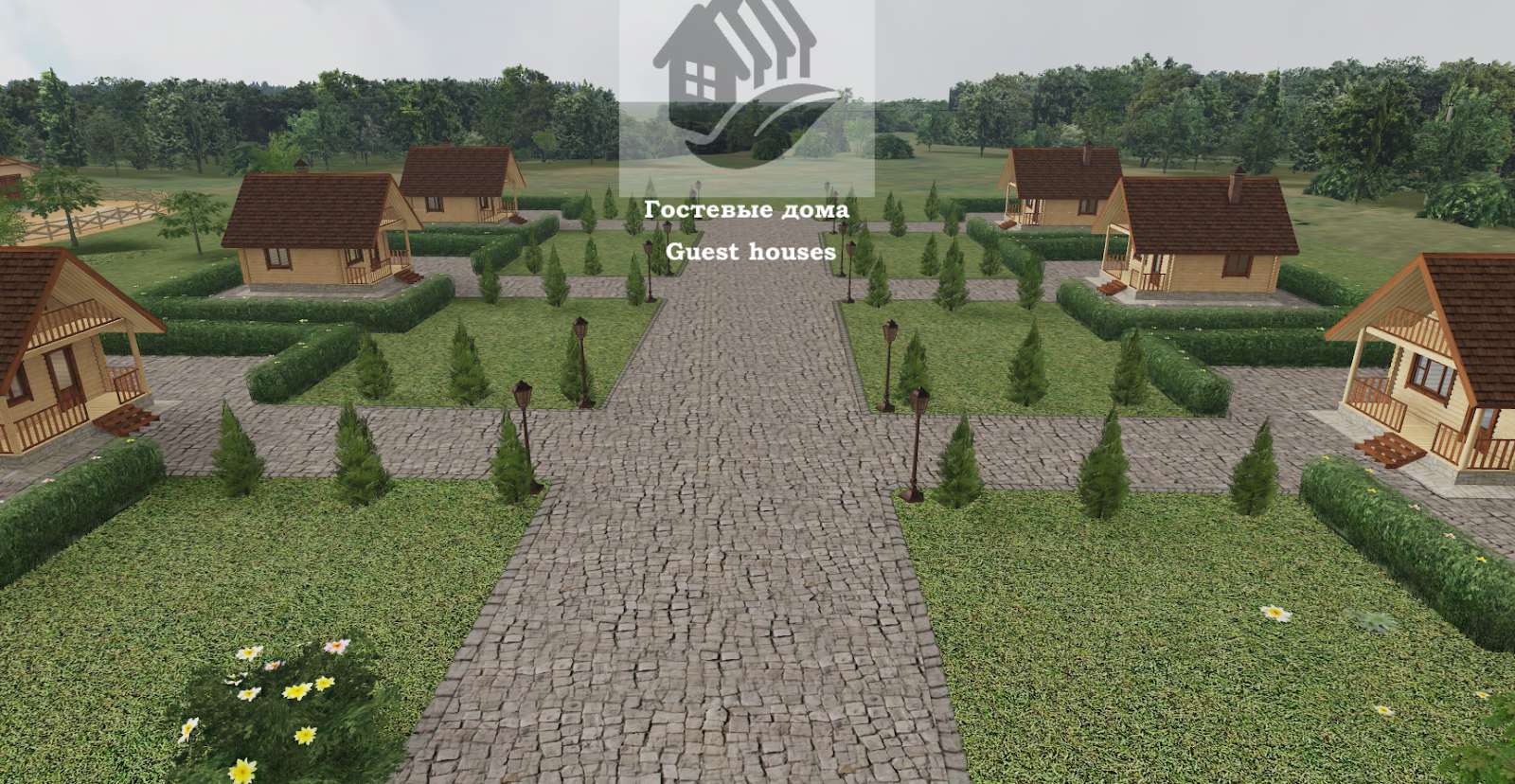 At the final stage of the project, the parameters were determined to create an animation of the park with accurate detail. The PlayCanvas game engine was also introduced for interactivity.

Launching it, we get information on several realistic scenarios: to take a 3D tour of the object in the first person or remotely inspect the territory from a bird’s eye view.

On the technical side of webGL technology, we can say that it is based on JavaScript code in HTML5 with access to dynamic content. Canvas, as an HTML element in browsers, provides WebGL support for rendering 3D graphics. Other technologies for working with 3D graphics, like OpenGL or Direct3D, are not intended for use in web pages and require the installation of extensions.

Since WebGL applications are developed in the format of web pages, they can be loaded on different devices: tablets, mobile phones, game consoles. When the user opens the page, the textured 3D model is loaded. Viewing is available anywhere in the world if there is a network and if the current version of the browser supports the WebGL library.

KLONA is your guide to the business world of the future

The KLONA company was glad to take part in such an ideological project. We believe that the park we have developed will not only bring profit from the sale, but also fulfill the dreams of many online and offline park visitors. 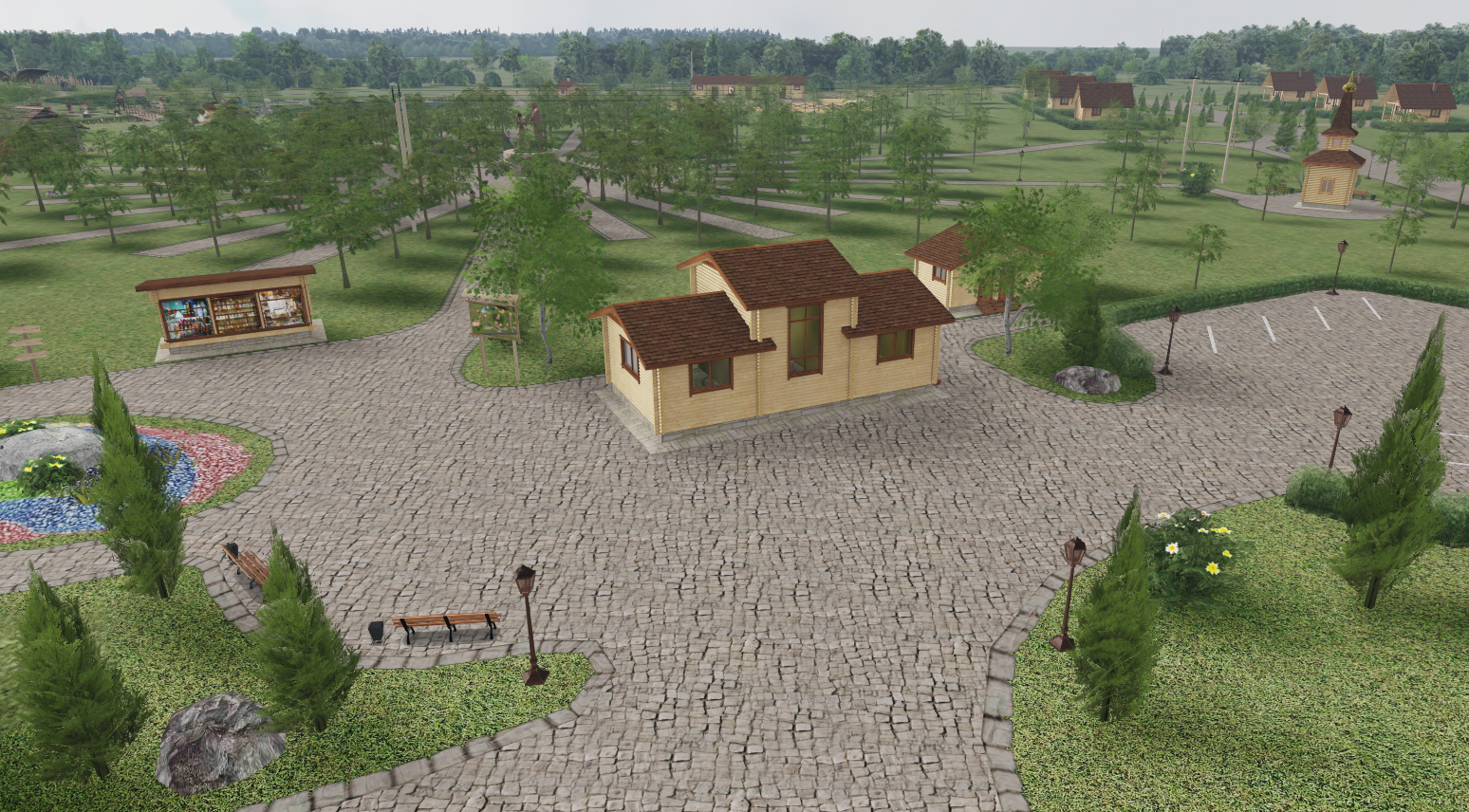 Take a walk in the park

If your business is related to online trading, when there is no direct contact with the client, it will also be useful for you to order a 3D presentation for the site. This will allow you to fully tell your client about the benefits of the products.

Industrial design and 3d graphics studio KLONA will provide you with a full range of top quality services in the field of 3d modeling and 3d visualization of any complexity.

The cost of developing a 3D project presentation depends on the complexity and is discussed individually with our managers. Larger shots and higher detail are more elaborate and require additional time and resources.

This job made you want work  contact consult express wishes with us. Write:
hello@klona.com.ua
PrevCharacter development for a computer game
Creation of weapons for playing laser battles on the modelNext